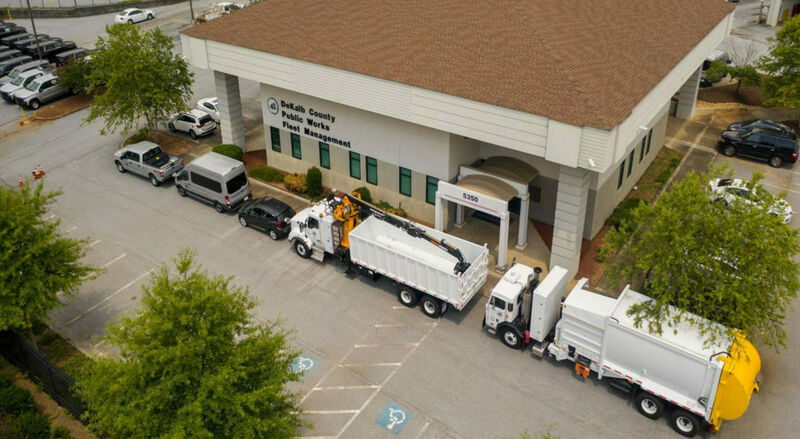 Dekalb County started with a simple idea to convert methane into usable natural gas, and it turned the idea into an economic winner that increased the efficiency and productivity of their operations. By using natural gas, it learned that it could save money by reducing its dependency on diesel and by lowering maintenance requirements, while also reducing noise pollution and eliminating harmful emissions from the air in its community.

Billy Malone, Director of the Sanitation Department in DeKalb County, first conceived the idea to use CNG when he realized that there was a lot of energy being generated by landfills, and that energy was being wasted. Decomposing materials in the landfill were generating methane, a potent greenhouse gas. That methane was being captured and burned off, or “flared”, to keep it from escaping into the atmosphere. Malone noticed that the methane flaring at the landfill was giving off so much heat energy that the grass around it stayed green throughout the winter. The DeKalb County team knew that something productive needed to be done with that energy. “In the beginning, we just wanted to do something with that methane that was flaring at the landfill,” said Robert Gordon, Deputy Director of DeKalb County Fleet Management. “They had been flaring off the gas at the landfill for years, and Malone found out he could put in a couple of generators and generate electricity from that. He received a grant from the Department of Energy (DOE) back in 2008, and he put in two 20-cylinder Caterpillar engines to run off the raw methane and produce electricity. Of course, it had the term ‘green electricity’ attached to it, so he got green credit for that, and it generated about $1 million in revenue a year.”

After successfully converting the landfill methane into power, Malone started thinking bigger. The County was still flaring a lot of gas at the landfill, so it started talking about converting the gas to pipeline quality and running trucks on CNG. “My boss came to me and asked what I knew about running trucks on natural gas. This was around 2009, and I told him I didn’t know anything, but I quickly learned about natural gas. We weren’t ready to do anything at the time, but we knew the day would come,” added Gordon.

Processing methane into fuel to power the County’s trucks presented a clear win for the environment and an opportunity that DeKalb County couldn’t pass up. In April 2012, a processing plant went live at the landfill. Additionally, adopting CNG vehicles has reduced DeKalb’s annual consumption of notoriously environmentally-unfriendly and frequently expensive diesel fuel year-over-year, from 1,401,654 Gallons in 2018 to 1,299,788 Gallons in 2019.

Since adding natural gas trucks to their fleet - all of which are equipped with Hexagon Agility CNG cylinders - DeKalb County has discovered that relative to CNG trucks, diesel trucks have many more maintenance issues. The low-maintenance advantage of CNG vehicles has become a key talking point for Gordon, who since winning the 100 Best Fleets in The Americas award for DeKalb County, has been speaking at conferences all over the country. “Initially, it was because we were going to make the gas for the trucks and save money, and it was a green thing to do,” said Gordon. “But once the trucks were put on the road, we started seeing all the inherent problems that came with the new emission systems on diesel trucks, that really, in my opinion, became more important. The exhaust coming out of the new diesel trucks is clean enough, but you just have to add a lot of things to the engine to make that happen. With CNG you don’t have that, so for a fleet manager, anything you don’t have to work on or spend money on makes a business case for it.”

The available uptime for the CNG trucks results in lower maintenance costs and the potential to reduce the fleet size, greatly benefiting the bottom line. “I have to keep an extra four more diesel trucks available in reserve than I do with natural gas because [diesel trucks] are just not as dependable,” added Gordon.

"You can go around all day long, saying you are being green, but when it comes to dollars and cents, natural gas trucks are cheaper to operate.”

While DeKalb County did receive some grant money at the outset, it was only to build infrastructure for their two fastfill CNG fuel stations which are managed by the sanitation department and are open to the public. Once the infrastructure was in place, CNG just became integrated as part of DeKalb County’s business model. “We’re a poster child for making it sustainable,” said Gordon. “You can go around all day long, saying you are being green, but when it comes to dollars and cents, natural gas trucks are cheaper to operate.”

Having converted most of its refuse trucks to CNG, Dekalb County found that these vehicles, which were known to wear out quickly, rapidly reduced the amount of maintenance needed, resulting in a huge advantage. Another exceptional benefit is that CNG trucks can run all day without refueling. “Whenever I budget for replacement of a truck, I just budget for a CNG truck,” said Gordon. And he now ensures that any new CNG trucks come not just with Hexagon Agility CNG cylinders, but with the complete Hexagon Agility CNG fuel system. “One of our lofty goals this year is to exceed our diesel fuel usage with natural gas. It keeps coming down as we replace diesel trucks with natural gas. That’s going to be a big milestone,” Gordon added.

Diesel trucks are known for being noisy, and one of the benefits of CNG trucks is the decrease in noise pollution. DeKalb County was surprised to discover that this prompted the only complaint it got from the general public: the new refuse trucks were too quiet! “The public would sometimes complain if they didn’t hear the truck when it came to the neighborhood,” Gordon reports, “because they’d miss getting their garbage put out.”

County Established in 1822, DeKalb County, Georgia is just east of downtown Atlanta and has approximately 750,000 residents. The County’s fleet management department is responsible for vehicle maintenance across all county services including road works, parks and recreation, sanitation, police, ambulance, and fire.