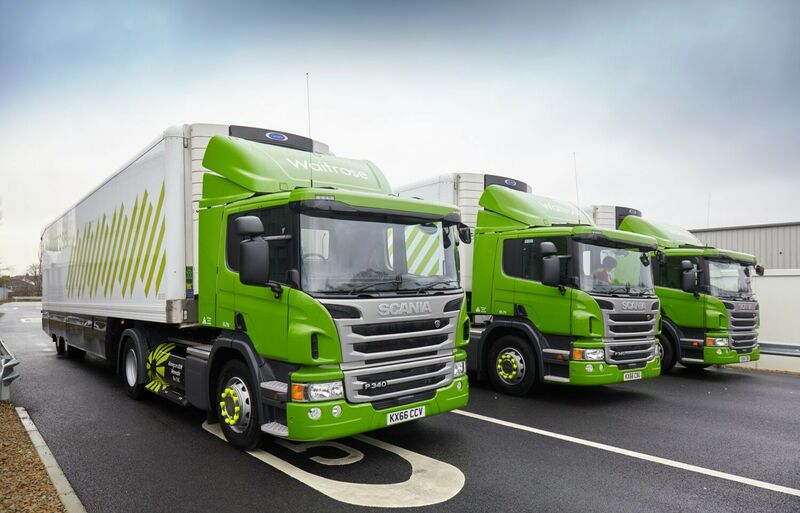 Waitrose were looking to meet their sustainability goals and roll out biomethane CNG across more of their fleet without changing their operating routes. They were able to solve this problem with the additional range offered by Hexagon Agility’s CNG fuel systems.

Many hauliers have previously resisted the switch from diesel to compressed natural gas fuel on account of concerns like limited driving range and a limited number of refuelling stations. But as a result of technology developed by Agility Fuel Solutions, the game has changed: these CNG-powered trucks now have a range of up to 500 miles (804 km). They’re also faster to refuel and easier to maintain. Justin Laney, general manager for central transport at the John Lewis Partnership, remarks, “With Europe’s most advanced CNG trucks, we will be able to make deliveries to our stores without having to refuel away from base.” Waitrose’s new fleet are able to complete round trip deliveries to the company’s stores in the Midlands and the North on a single fill.

“With Europe’s most advanced CNG trucks, we will be able to make deliveries to our stores without having to refuel away from base. Using biomethane will deliver significant environmental and operational benefits to our business. It’s much cleaner and quieter than diesel, and we can run five gas trucks for the same emissions as one diesel lorry."

The increased range of Europe’s most advanced fleet of CNG-powered trucks is impressive, but it’s no accident. The standard European setup for heavy goods vehicles is eight steel CNG tanks. By contrast, Waitrose’s fleet is the first in Europe to use twin 26-inch diameter carbon fibre composite fuel tanks from Hexagon Agility. With this Type 4 composite cylinder-based fuel system, trucks can store gas at 250 bar pressure, 25% higher than the 200 bar pressure possible with steel tanks. The CNG fuel system of the new Waitrose trucks weighs only 435 kg. That’s 54% lighter than a 945 kg system based on steel tanks, a weight savings of over half a tonne. This weight savings allows Waitrose to haul more freight.

With the new fleet, Waitrose’s goal of reducing its carbon intensity 65% over ten years by 2020 is within reach, as is its goal of keeping its food and agricultural waste out of landfills completely by the same date. It’s an accomplishment of epic efficiency. The supermarket chain’s new trucks are powered by renewable biomethane CNG, resulting in an 84% carbon emissions reduction compared to diesel. With Waitrose’s new fleet running entirely on biomethane, they’ll be able to run five CNG-powered trucks for the same overall emissions as one diesel truck. And in Waitrose’s case, that biomethane is a product of its own food and agricultural waste, which is now used to power their fleet rather than sent to landfills.

Even better, biomethane CNG is 35-40 percent cheaper than diesel. That amounts to a savings £17,000 in savings in fuel cost per truck per year, an amount that will allow the trucks to repay the increased upfront cost in only two to three years. Additionally, these vehicles are likely to operate for at least five years longer than their diesel counterparts, generating overall lifetime savings of £75,000 to £100,000 per vehicle.

With Hexagon Agility’s long-range CNG solutions enabling biomethane throughout its fleet, Waitrose is reducing emissions and reducing waste, all with a lower total cost of ownership.