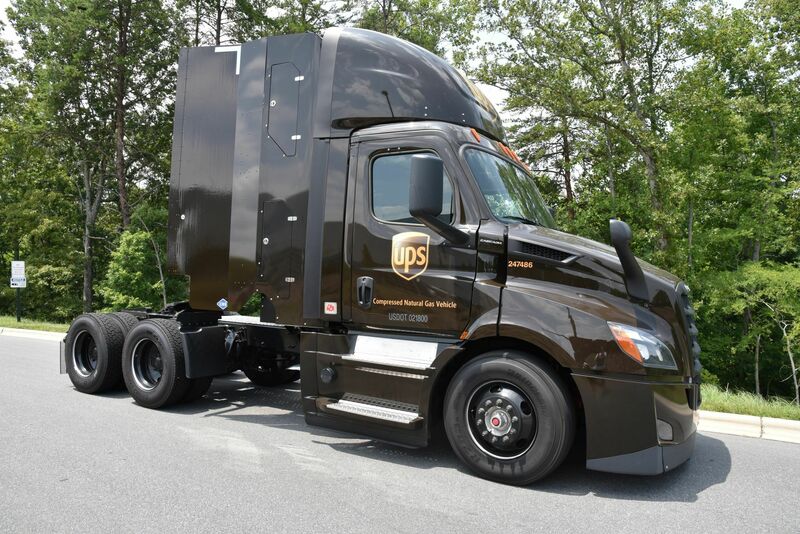 Headquartered in Atlanta, UPS is a global leader in logistics, offering a broad range of solutions transporting packages and freight, facilitating international trade, and deploying advanced technology to more efficiently manage the world of business.

UPS aspires to meet the growing demand for global trade while reducing its impact on the environment. To do this, it uses a rolling laboratory including a variety of more than 8,300 low-emissions vehicles.

The first includes use of ORION, UPS's proprietary route optimization software, to decrease the miles it travels per delivery. Since the software’s launch in 2013, UPS has reduced its distance driven by 210 million miles. This has led to a 210,000 metric tonne cumulative reduction in carbon-dioxide (CO2) emissions and a realized cost savings of $400 million. UPS expects that with ORION now fully deployed, it will see annual reductions of 100 million miles and 100,000 metric tonnes in CO2 emissions.

Second, UPS aims to reduce the amount of fuel required to drive these miles, using telematics and diligent vehicle maintenance to identify opportunities to enhance safety and boost efficiency.

of RNG in the transportation industry

“With more than 4,400 natural gas vehicles and a network of fueling stations, UPS has had great results using natural gas as an alternative fuel in our fleet.”

For over ten years now, UPS has tested and deployed a variety of vehicle types, matched to the terrain and delivery conditions of each location. This targeted approach allows for maximum efficiency and supports UPS’s continuous integration of new technologies and operational efficiencies across its large, global fleet. UPS operates a rolling laboratory of more than 8,300 vehicles, driving more than 1 million alternative fuel and advanced technology miles each business day. The “laboratory” moniker is apt, as UPS monitors each vehicle’s performance and works with manufacturers, government agencies, and non-profit organizations to advance new technologies.

In 1989, UPS began testing CNG to assess its viability as an alternative fuel. Today, UPS has the largest private fleet of CNG vehicles in the United States—more than 1,000 package delivery vehicles operating in 16 states. A total of 19.6 percent of the conventional diesel and gasoline fuel previously used by UPS’s ground fleet is being replaced by alternative fuels, including renewable natural gas and renewable diesel. It has also invested in over 2,200 propane package cars for delivery. As for its heavy-duty trucks, UPS has purchased over 1,300 LNG tractors and has contributed to over 44 LNG and CNG fueling stations to support them.

UPS has ambitious goals and, with its alternative fuel fleet, is on track to achieve them. UPS’s CNG trucks have much lower emissions than diesel: carbon monoxide is 75% lower; oxides of nitrogen are 49% lower; hydrocarbons and nonmethane hydrocarbons are 4% lower; and CO2 is 7% lower.

In 2019, UPS announced plans to purchase more than 6,000 natural gas-powered trucks beginning in 2020 and running through 2022. This commitment represents $450M investment in expanding the company’s alternative fuel and advanced technology vehicle fleet as well as supporting infrastructure.

New vehicles are equipped with Hexagon Agility's medium- and heavy-duty on-board CNG fuel systems and can interchangeably use RNG and conventional natural gas. Produced from landfills, dairy farms and other bio sources, RNG yields up to a 90 percent reduction in lifecycle greenhouse gas emissions when compared to conventional diesel. As of October 2019, UPS has agreed to purchase 230 million-gallon equivalents of RNG over the next seven years, making the company the largest consumer of RNG in the transportation industry.